Sky Hopinka: Memories of Movement | Beyond the Nest (Rochester) 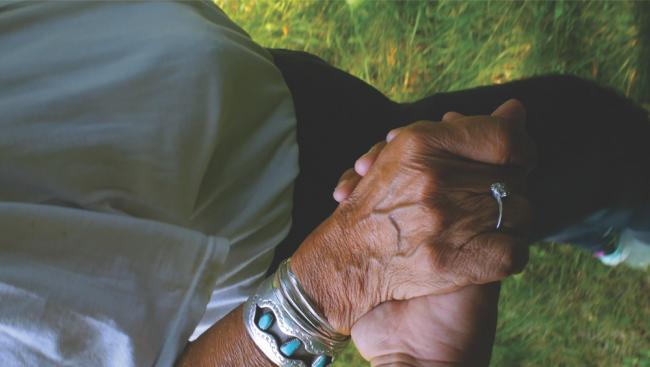 A member of the Ho-Chunk Nation of Wisconsin and the Pechanga Band of Luiseño Indians, Sky Hopinka is an internationally recognized multimedia artist who investigates the layered structure of Indigenous identity. Sky Hopinka: Memories of Movement includes new work by the artist: the three-channel video installation Here you are before the trees (2020), an etched photograph, and a calligram that forms a large-scale text-based image. Together, these works express an Indigenous understanding of place and belonging as defined by notions of community that span ancestral and non-ancestral lands alike.
Please help us keep this calendar up to date! If this activity is sold out, canceled, or otherwise needs alteration, email mindy@kidsoutandabout.com so we can update it immediately.

Memories of Movement features three artworks that connect landscape, history, and personal experiences. The three-channel video installation Here you are before the trees (2020) focuses on the Indigenous histories of upstate New York and their relationships with other regions of the United States. Each of the three channels is set in a different geographical area: the Mahicannituck (the Hudson River area), the Waaziija (the homeland of the Ho-Chunk Nation of Wisconsin), and the highways that link them. Hopinka lives and works in the Hudson River area and frequently travels between there and the Waaziija. This video features his grandmother, Dolli Big John, who lived in the Waaziija. Through his personal relationship to these places, Hopinka relates to the larger historical narrative of the forced relocation of the Stockbridge-Munsee Band of Mohican Indians from the Hudson Valley to the Midwest in the early 1800s. The video also incorporates textual and audio materials from Standing Rock Sioux scholar Vine Deloria Jr., Ho-Chunk anthropologist Renya K. Ramirez, and poet Adrian C. Louis (Lovelock Paiute). The scrolling text across the bottom of the three screens comes from a speech written by Mohican diplomat John Wannuaucon Quinney in 1854 about the devastating consequences of the US colonization of Indigenous peoples.

The exhibition also includes an etched photograph (2021) of a group of friends together in the Adirondacks landscape, and a large-scale calligram (2017) that forms a text-based image shaped like a flying goose. The calligram contains a 1923 text by anthropologist Paul Radin describing the Winnebago tribe.

By carefully observing ancestral landscapes, moving through them, and engaging with those who inhabit them, Hopinka develops a poetic visual language comprising references to the personal, the symbolic, and the historical. What links all of these is an understanding of place and belonging through community that goes beyond limiting Indigenous culture to ancestral lands.

Adults & kids together Adults without kids